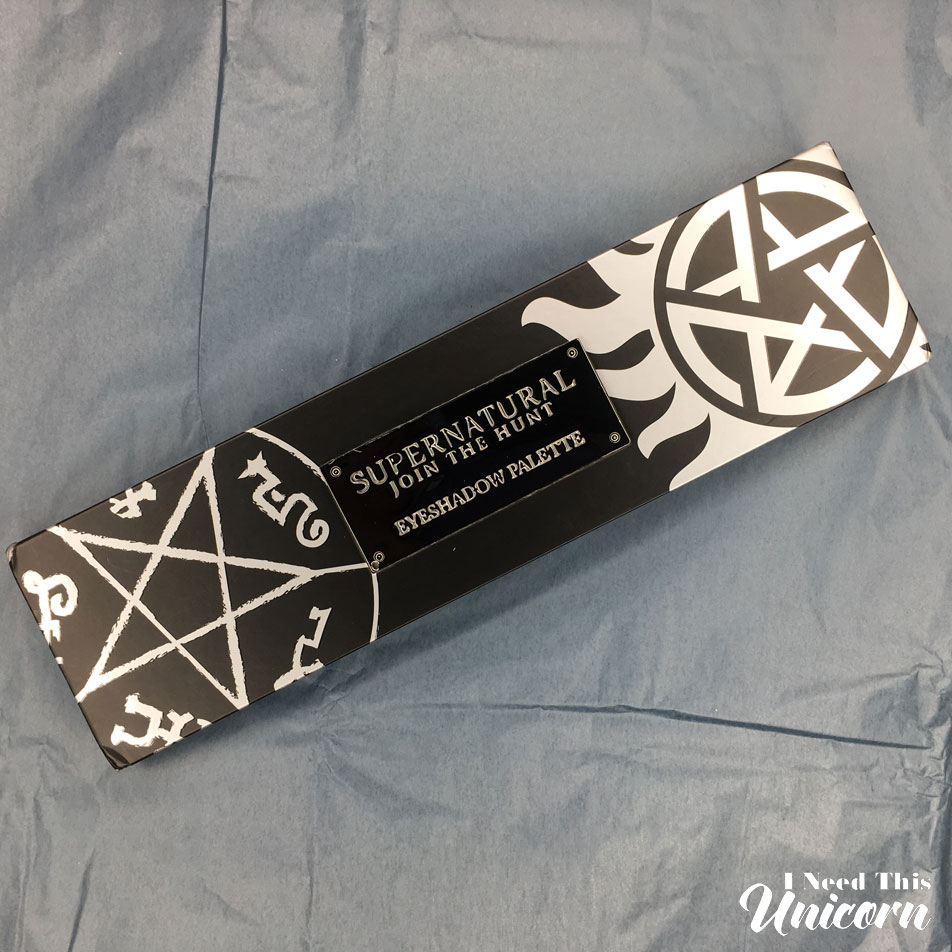 How was I not alerted the moment this was conceived? I must be put on a mailing list where Supernatural themed ANYTHING gets made! I have a lot more Supernatural tees than I care to admit.

This palette is by Blackheart Beauty, exclusively for Hot Topic. The full retail price is listed at $14.50, but Hot Topic often has sales. I purchased this for $11.90. There are unicorn and cosmic themed palettes also by Blackheart. If you know me at all, I buy anything with either of those. But I had to cool it and just try the one. And I had to get the Supernatural palette, it’s one of my favorite shows. Right now as I am typing this post, the other palettes are on sale for around $7. Unfortunately, the Supernatural palette is sold out. But I have linked it just in case it’s in stock again. If you are obsessed, you should stalk it. It’s not the greatest palette, but if you love the show, it’s a nice collector’s item.

It being from Hot Topic, and retailing at $14.90, you know it’s not going to be an amazing quality eye shadow palette. I fully expected that and got it cause it was cheap and for the novelty. Well I was sure surprised when I made the swatches. The first two colors I swatched were the black shadows. Whoa. I did not expect that. The two black shades are VERY pigmented.

However, the quality of the pigmentation got worse as I went down the palette. Shockingly, the basic neutral colors swatched the worst as well was the purple, but I hear purple is hard to make. But I don’t expect that from basic neutrals!

They are definitely crumbly with tons of fall out. I could tell as soon as I opened the palette because Possession was already breaking in the corners. When I applied the colors on my eyes and at the end of the day, there was definite fall out under my eyes. Like we need to shelter ourselves in their Men of Letters bunker kind of fall out.

The shadows are very powdery, and not so easy to blend. You can blend them as much as you want, but they can get patchy looking. I was able to make it passable, but really we’d all rather have buttery, smooth, beautiful shadows with little fuss.

So it’s not the best quality, but really I bought this for the novelty of having a Supernatural palette, a well thought out one I must say. Yeah, it would have been nicer if the shadows were creamy with no fall out on your cheeks, but it also wouldn’t have been $11. At least this wasn’t like the Tarte True Blood palette where the shadows blended into muddiness and cost $52. But I appreciated the names, color palette and choices of finishes. I think they at least did a good job with that.

There are 3 metallic shades, 1 matte with glitter and the rest are matte. I feel like mostly mattes went well with the subject. It was mostly the angelic shades that had the metallic finish, which is appropriate. And though the Impala isn’t glittery, Baby needs to shine!

They kept it all dark and earth tones because you wouldn’t picture the Winchesters wearing anything pastel or neon. There are a few light colors cause you wouldn’t wear all dark colors and that’s it. (Well, I guess some people might, but I wouldn’t.)

I was fact checking to see if my guess on pastel and neons were correct, and wow people have actually kept track of their wardrobe! I cannot even try to find any pastel pink or bright neons, there’s so much to look through! Um, these eye shadow colors seem to be correct. But in my personal opinion, for Hunter, I would have liked to have seen an olive green to match Dean’s jacket. But really, they captured the show’s vibe.

The palette also comes with a brush. It’s no throw away brush, it’s patterned with the anti-possession symbol. It can be used for a flat shader brush. You will definitely need other brushes, this one won’t cover it all. If you don’t watch the show, you probably don’t get all of the name references. Especially Assbutt.

If anyone is offended by the name, feel free to call it Flatbread.

For any reader that has no clue what the names of the shadows are about. I will sum it up for you: This past December I got to meet the boys, plus Chuck. I actually ran into Rob Benedict in the hallway and he was super nice. I wasn’t allowed any photos, but I appreciated that I was able to chat with him for a bit.

While taking a photo with the actors, you aren’t supposed to say more than hello or a pose request. But I can tell you that 6’4” is really tall (Jared) and Jensen has super green eyes.

Ruth Connell is adorable and funny. She gave people whose questions she answered some last minute gifts… toiletries from the hotel!

Disclaimer: I bought this eye shadow palette with my own money. The boys did not hold The Colt to my head and tell me to give this a positive review. There are no affiliate links, I swear to Chuck.