Artist depictions of Disney Princesses have been an on-going trend for awhile and it’s always so fun to see their interpretations. This time, Steve Thompson Principal Designer for Disney Stores, Jessica Fuchs Senior Designer for Girls Toys at Disney Stores collaborated to create a whole line of merch for a Designer Series, just in time for the holiday season. This collection is inspired by fashion sketches of the era the films came out. Colourpop has a really great video of behind the scenes of how this collaboration came about. The Colour Pop team, including Erin Lindsay (Product Development Manager) of Colour Pop developed this makeup line with James Veo who manages the Beauty Collections for adults at Disney to create this amazing collection. If you are interested, I am embedding the video from Colourpop’s channel below. You can be introduced to some key members of the team who worked on this collab.

Don’t we love it when franchises we like collab with makeup companies? It’s even better when they come out with a fairly large collection and we can choose our favorite characters to rep! While we don’t have every single princess and heroine from Disney, there should still be at least something for everyone! There’s always a little backlash when another neutral palette comes out. Honestly, it’s appropriate for the theme. It’s not a cartoon theme, but a what-the-princesses-would-probably-wear-to-the-red-carpet-for-the-premiere-of-their-movie theme. They also have references to the movies themselves. Like what color would Chip be? A bone color! What color would be in Aladdin’s flying carpet? A purple of course! It’s not boring, not to me! My ideal palettes have matte neutrals, metallics and purples. Besides, you can’t beat this level of quality being only $20!

Even the shimmers were buttery smooth! I usually find them to be gritty and drier, like in The Golden State of Mind palette. Well, not in this princess palette! It felt comfortable and no fallout (the one time I used it!) I’ve had this for a few hours so my experience and opinion could change. But so far, so good.

Little blurbs on specific colors:
Chip- A highlight shade for everyone else. A shade to blend out my transition for me.
Triton- has a sheen to it, which was surprising and welcome. It makes it more different than the colors next to it.
Poison Apple– this color is in so many palettes and is always underwhelming. It’s just a difficult color to make super saturated.
Magic Carpet- deep plums like this always lean brownish on me. Still works though.
Midnight Curfew is what we wish Black Tied could be. This eyeshadow palette is a perfect holiday gift, if only it wasn’t released so early! I feel like if anyone really, really wanted this, they would have already bought it. But say in December, I feel like most people are already burned out and aren’t really focusing on themselves but spending what little money they have left on more gifts for others. That’s the perfect time to get something for someone else cause they probably aren’t buying things for themselves! While I’d normally want to get my favorite princess, that color wasn’t something I’m attracted to. The only lipstick I wanted was the Cinderella one. The Jasmine one was okay, but I prefer a cooler toned bright pink. I can tell the Jasmine one might lean orange on me. Cinderella looked like the perfect pink on everyone else. But I knew looking at it in the bullet, it would lean darker and a little more neutral on me. And it does! It’s a fine color, but certainly doesn’t look the same on me as it does on the influencers I had seen it on. Seeing the Colourpop website, Cinderella was the least popular, it was the last one to sell out! How freakin cute is the packaging with Cinderella’s castle? I am assuming it belongs to Cinderella because Aurora didn’t seem to be invited to the party. If there was ever a collection with Sleeping Beauty, there FO SHO needs to be a duo-chromatic lip gloss that switches between pink and blue. (err I guess they make those already cause I seem to have a lot of lavender duochrome glosses.)

If you are a collector of purple eyeshadows and wondered if A Whole New World is similar to the other lavender Super Shock Eye Shadows from Amanda Steele and My Little Pony…. it’s different enough to pick up. And it’s hard to beat 5 bucks!

As you can see Ignition from the Amanda Steele collection is a lot warmer (pinker.)
While Sunbeam and A Whole New World look similar in tone, Sunbeam is a lot more glittery.

If your favorites were sold out, don’t fret because the Colourpop collection is also sold at Disney’s website and I believe in Disney stores. (They will probably restock at Colorpop’s website anyway!)

The Designer collection is inspired by the fashion and red carpet looks of their theatrical debuts as well as inspiration from their own stories. My favorite look is also my favorite princess: Ariel debuted in 1989. Her look is very 80’s with ruffles and blue, violet and pink. (The violet mirroring her seashell bra.) And don’t forget the fishnets and bangles! Very Madonna, Ariel! 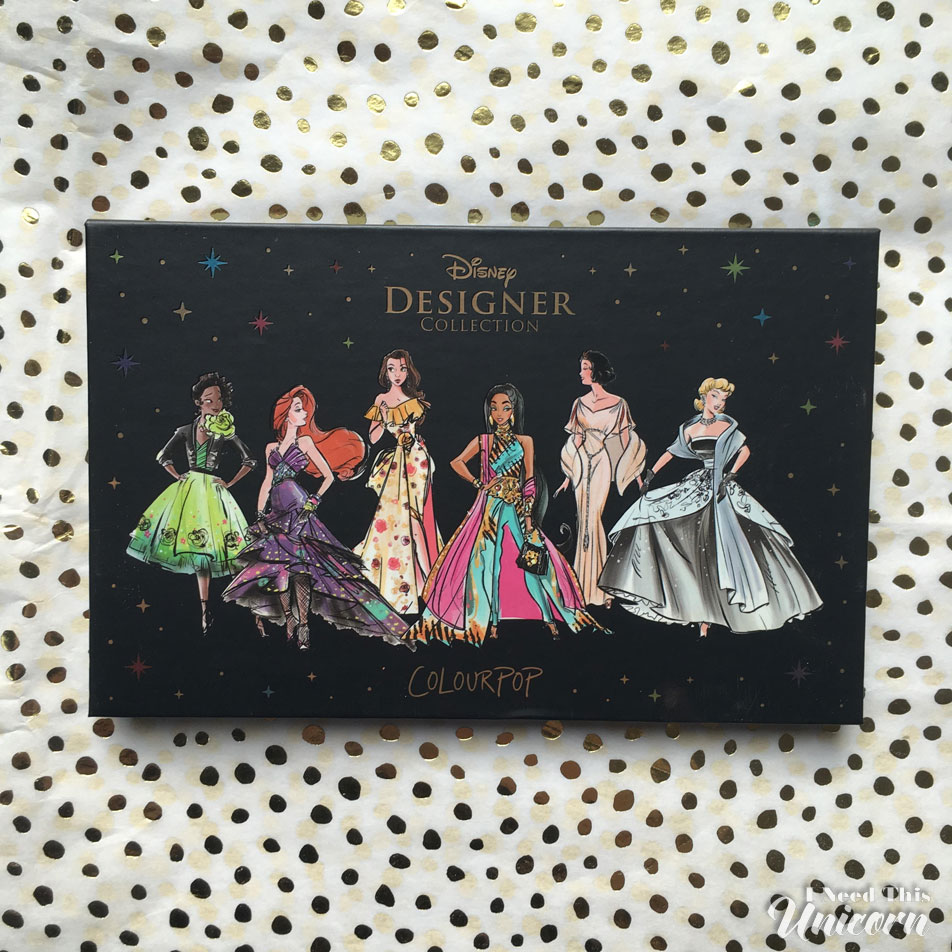 There is not only the makeup line from Colourpop, but actual merch!  They would also make holiday gifts themselves. Especially the glass set and ornaments. If you know the Disney theme parks, pin trading is a thing. They have a couple sets of pins, for the pin lovers. I personally like the note card set, the key pendant and Tiana’s necklace. Yup, get It’s A Princess Thing. It’s beautiful, usable for everyday and at a great price. Bigger drugstore palettes are like $14-19 these days, but at a lower quality. This is smooth, buttery, pigmented and comes in different finishes. Even if it wasn’t Disney themed, it’s a great palette itself, and I would have bought it anyway. My friends always ask me for my opinion and if they should buy something. This is what I would tell them: Get it get it getitgetitgetit!

Oh I did good. I swatched, photographed, used, and wrote an entire review, and posted it the day I got it. That does not happen.

Disclaimer: I purchased everything on my own. My opinions were not swayed by any princess, king, prince, animal sidekick or villain.