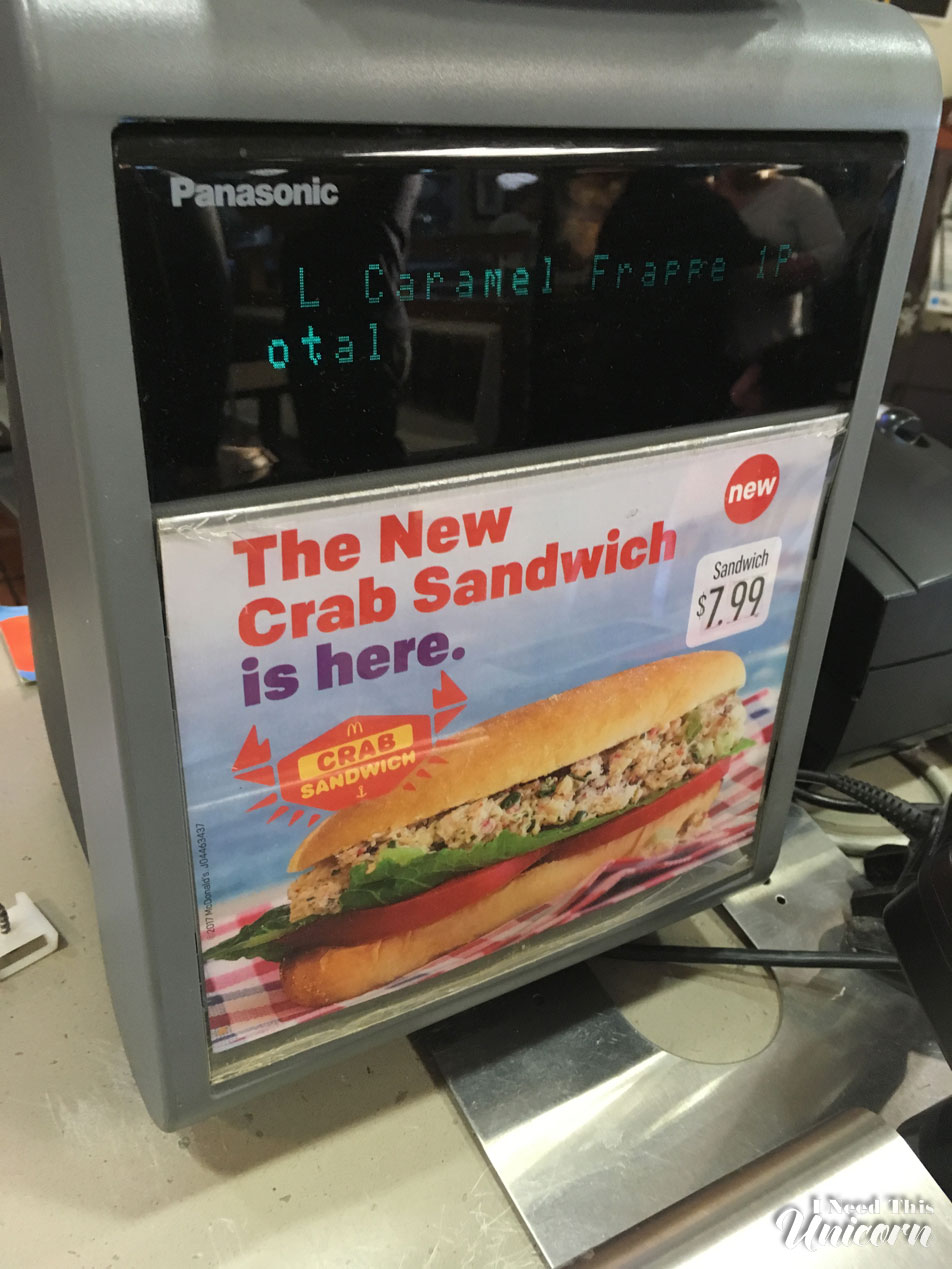 Yes, you read that right McDonald’s came out with a crab sandwich. And no, it’s not called the McCrab.

San Francisco is known for crab, and Gilroy is known for garlic. I appreciate that McDonalds is branching out to regional tastes. Especially since ours is so great 😛

Though it may be frustrating to those who aren’t nearby. I guess we can brag that we have garlic fries and crab sandwiches at our McDonald’s. Though I am getting mixed reactions from people who think it’s stupid to get shellfish at McDonald’s to people planning on swinging by San Jose to get one.

The Garlic Fries were so popular that they wanted to try out a crab sandwich. I didn’t find it as garlicky as I prefer, but I still liked it and was going to order it again but the McDonalds I went to didn’t have it.

Though San Francisco is famous for Dungeness Crab, the sandwich featured at McDonald’s actually contains snow crab and that’s fine with me! I love Dungeness, Snow, King, Blue… I have yet to try Crystal Crab but I am sure I will love that too. I’m from the Bay and I’m part Chinese. We love this stuff. And yes we eat the guts too. I’m asian, I eat weird things. I really appreciate that they didn’t use KRAB (Auto Correct, please F off) which is pollock. I don’t prefer crab with a “k”.

The crab sandwich was co-developed by chef Ryan Scott of Finn Town Tavern in SF.  The menu looks very appetizing so I may have to eat dinner there. And no, there is no crab sandwich at Finn Town (as of now). I mean, he wouldn’t want to compete with with own sandwich at Mc D’s.

As of Feb ’17 they are only available in four locations, all in the San Jose area. If it does well, it will expand to other Bay Area McDonalds next year.

The participating McDonald’s are located at:

It was slightly annoying that had to be in San Jose, which is an hour away. But I guess it was sort of good in case on McDonalds ran out, you could go to the next one that was within the same city. But they didn’t run out on me, and it would probably have been better for Bay Area residents to have them spread out across the Bay. San Jose is only close to those in San Jose!

I went to the one at Monterey Rd. The complex has a Ulta which made me very happy! There was also The Boiling Crab, Ike’s and a Target across the way. Made the drive worth it because I found Crystal Pepsi at that Target.

The sandwich contains snow crab, mayo, celery, red bell pepper, seasoned clarified butter, lettuce and tomato on a sourdough roll. (Also a San Francisco staple.) It was a crab salad, and not so much chunks of crab. I ate two of them of course.

It wasn’t mind blowing, but I liked it just fine. I would order it again if it came to a McDonalds near me. It’s a healthier choice than my usual bacon cheese burger and a lot cheaper than a crab sandwich at a sit down restaurant, which in the Bay Area may cost you about $20.

I think my two favorite crab sandwiches are melts (with cheese). I’m not a fan of celery, nor am I am fan of lettuce and tomato on my sandwiches. I still ate it because that is the way Chef Scott intended. But it was light and didn’t make me feel bloated or full, nor did eating seafood from a McDonald’s make me sick. I also enjoyed the novelty of eating something that wasn’t typical of McDonald’s.

The sandwich was pricey for fast food. The price ranges from $8-9. The one on Monterey Rd was $8. They did not have garlic fries so I didn’t get the Bay Area special. (Not an actual thing I am making that up.) But $8 is a lot cheaper than what you would pay at an actual restaurant. But yes, it was the most I had ever spent on McDonald’s, especially since I bought 3! 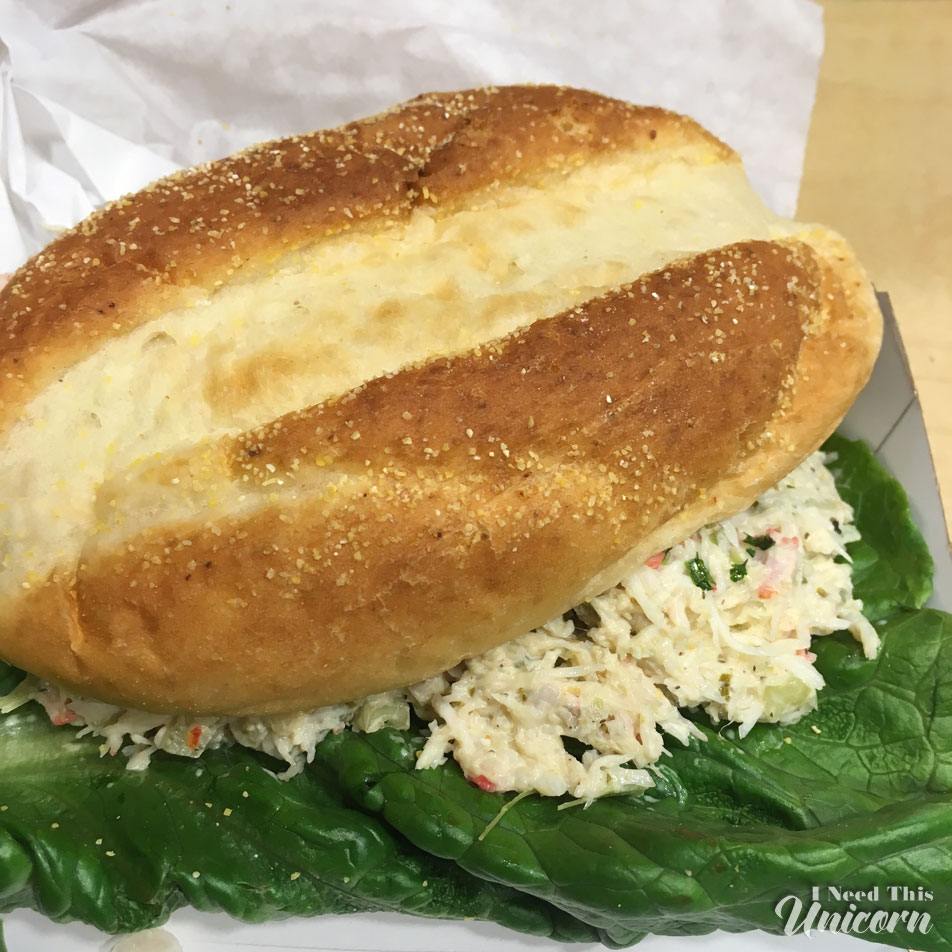 Two weeks before, I went to Gott’s in Napa. After contemplating what I wanted to get during the hour drive, my choices went out the window when I saw the sign for a Crab Sandwich. If was a hefty $20. While I would say it was a better crab sandwich, it wasn’t worth $20. And by better, I liked the amount of crab they put into it and it wasn’t fluffed up with celery and bell pepper. Gott’s has scallions and lemon aioli. (The one at the Crab House is also $20 and more substantial and by far better than McDonald’s and Gott’s.) If you’re in the Bay Area and are curious about it, I’d recommend making the drive to check it out! It is only out for a limited time, I don’t know the end date. But go SOON! There wasn’t exactly a line going out the door so I am unsure if it will extend throughout the Bay, so it may be your only chance to try it out.

I also want to recommend Escape From Fisherman’s Wharf in Pleasant Hill if you are craving a crab sandwich at not a SF price. They go for $10.25 to $12.50, depending on which one your order. They come in chunks and they use Dungeness Crab!

McDonald’s didn’t sponsor this post, nor did any other restaurant. I went there on my own and paid for it.