If there’s anything I want, it’s something limited edition! It’s hard to find, but once you do, it feels so rewarding to find this treasure. Plus, several decades later, it will become a nostalgic thing you once enjoyed when you were younger and you wish you could get it again.

I’m covering LE snack foods, fast food, and seasonal items for Easter. If you have any interest in any of these at all, head to the store at once! These items may be difficult to find and then when they’re sold out, it’s gone for good. And we have that fear of missing out, don’t we? If you do find them all, please take care of your health and do not eat all of these at once! If you have someone to help you eat these, that’s even better! Instead of Do As A Flavor, Lay’s are coming up with their own special edition chips flavors and we, the public, don’t vote on the permanent one this time. They seem to just be limited edition. It’s a damn shame that Wasabi Ginger is discontinued because it was truly the best!

Lay’s Wavy Electric Lime and Sea Salt
I thought it would be boring, but it turned about a lot sweeter than I expected. Like a salty key lime pie without the meringue. Take that as you will. Wavy Lays makes it easier to mindlessly eat while watching TV, even salted key lime pie.

Lay’s Flamin’ Hot Dill Pickle
This was number one on my list. I like pickles and I like spicy food.
First, is the hit of dill pickle, it’s like the pickle chips from Zapp’s, which I like! Then the Flaming Hot hits you and gets you in the throat! This one you can’t mindlessly eat while watching tv because you’ll be running off to get water. It keeps you from eating to much in one sitting! Good for portion control, I suppose.

Personally, I find that Flaming Hot Cheetos is not as hot as this. I kinda like it. But I partake in hot pepper sauce eating contests for fun. And I mean Ghost Pepper, Scorpion, and Carolina Reaper!
Also, a controversial opinion, I actually don’t like Flaming Hot Cheetos. There’s something about the aftertaste. I know people are obsessed with them, but I’ll take regular Cheetos any day. Or perhaps the Flamin Hot Dill Pickle! I like ’em, but they get spicy in my throat and I have to stop. This would make for a good chip variety to serve at parties!

Also in food news, Vlasic is making Pickle Chips, which are dried pickles. I will have to hunt for that and try those.

Lay’s Kettle Cooked Beer Cheese
This is the winner right here! And here I was thinking it wouldn’t be.
I hate beer, don’t even want to smell the stuff. But this is not disgusting. These crunchy kettle cooked chips have a sweet taste that reminds me of the smell inside bars. You know, the kind of pubs that are sticky. I thought it wouldn’t taste like beer at all, and that the name would just be a gimmick and only taste like cheese. But no, it does have the faint flavor of beer without being off putting. I’d get another bag for Beer Cheese for sure!
Would beer lovers like these chips? Hell if I know, I don’t trust their opinion! Black Forest Organic Sweet & Sour Bunnies
I’m on my third bag. Shut up.
These bunnies are not sour like regular sour candy coated in sugar, so don’t expect any Sour Patch or Warheads level of sourness. Just a slight tang that makes it a little bit different than normal gummy candy. But no, you shouldn’t eat these. Just buy out the entire stock at your local store and then ship it to me. My Po Box is listed somewhere.

I can’t stop eating these. It’s an absolute sickness. Honey Bunched of Oats Chicken & Waffles
There are shaped mini chicken drumsticks!
I’m not the biggest fan of maple syrup (it has it’s place, I don’t shun it) but I wanted to see how they achieved the chicken flavor. Isolating the mini drumstick… it’s possible it may have chicken bullion powder, you can taste the tiny bit of salt. They managed to get a chicken flavor without managing it be disgusting, well done! Maple is definitely the dominating flavor. The truffle flavor is incorporated into a white cheddar cheese sauce. I thought it was some sort of bechamel sauce while eating it.

I shouldn’t have to say this: Truffle fries at gastropubs are just better than the fast food ones. Instead of having truffle oil coating and mixed with the fries, it was a dollop next to it. So if you have a craving for truffle fries, you’d be better off getting $10 fries at a fancy gastropub.

I did like the burger enough to devour the thing immediately. My burger was nothing like the stacked one in the advertisement but we all knew about marketing and food styling for photography. And that’s alright! If I can get my burger smaller so I don’t over eat cause this is already 10 billion calories, then thats just fine. Though a normal person may be disappointed.

There are likely no truffles involved in the making in this burger and fries. Most truffle oils are just “perfumed” with the scent and don’t actually include truffle. A fast food joint won’t have such an expensive ingredient. That’s fine, no one wants to pay $100 for a burger. I’ve had the Froot Loops mini donuts before, I think I tricked myself into thinking they were different flavors before. The second time around, I’ve come to the conclusion that it’s just the Froot Loops flavor. I haven’t had the cereal since I was a kid so I couldn’t tell you if they all the same or not. If you like the novelty, might as well pack in the extra calories! 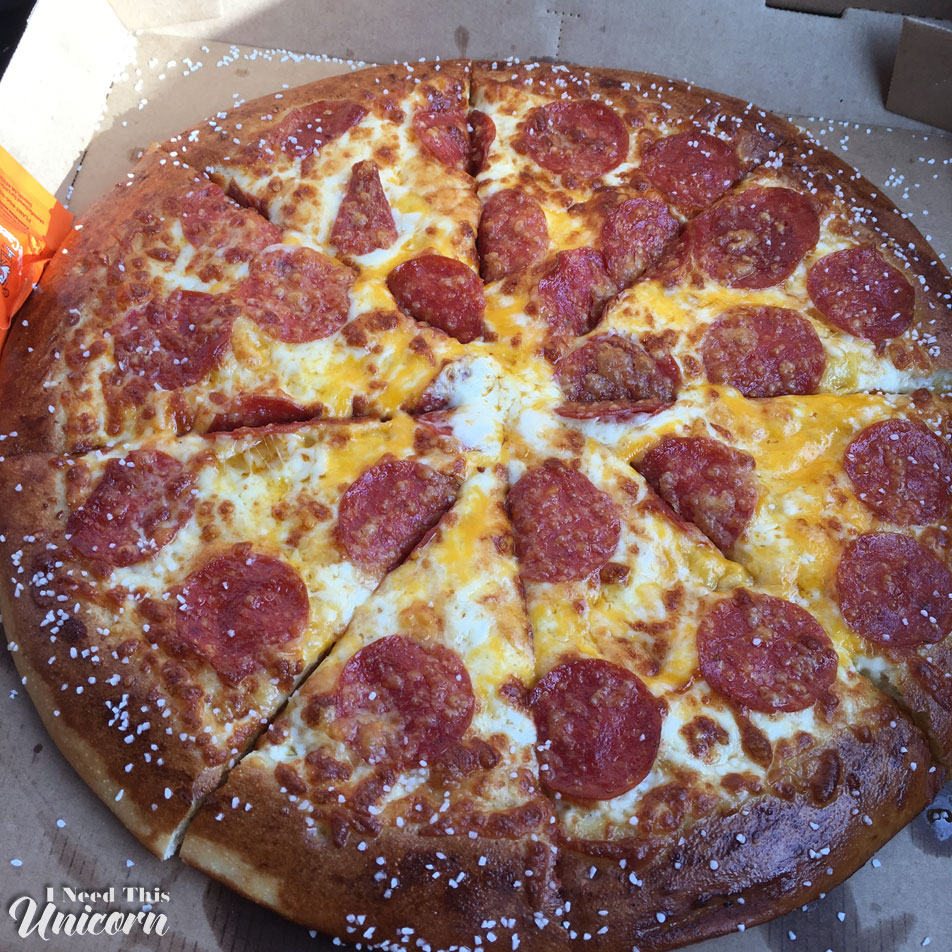 Little Caesars Pretzel Crust Pizza
Is it a pretzel without salt? Yes. So you can lay off. The pepperoni is already salty.

The cheese has a layer of creamy cheese like it’s Velveeta, it’s very odd and unlike their standard pizza which doesn’t have that. Looking it up, it’s the creamy cheddar cheese sauce. Also included is mozzarella and munster cheese. There’s no tomato sauce. It’s because if you go to the mall, cheese dip is usually paired with pretzels. (Though if I get a pretzel, I get the pepperoni pizza pretzel and it has marinara!) What all that said, I’d prefer a zesty tomato sauce, the creaminess is too weird.

As far as regular pizza crusts, they’re garbage. I don’t eat ’em. There’s no sauce, there’s no cheese. It’s just bread. I don’t understand why people even order breadsticks with their pizza when the crust is already one. But this pretzel one, oh you bet your ass I’m eating this! I like the pretzel bread, it tastes like it should. The salt wouldn’t bother me if I was eating it by itself, but with the pepperoni… woooo!

It’s not bad, I like the pretzel but can do without the extra salt. I’d maybe like to try it with a standard tomato sauce for that zest instead of a creamy cheese sauce. And perhaps have that dipping cheese on the side for my crust.

I’m going to be bloated for a month. I need water. Carrot Cake Oreo
Graham crackers with spice. The spice makes it taste more festive like for fall or winter. I enjoy the cream cheese filling. Oreo Thins Pistachio
Sometimes I forget how pleasant pistachio flavor is until I have it again. I feel slightly disappointed that they are Thins, but maybe a Double Stuff would cheapen it. Maybe we should be left wanting more. Okay pistachio, I see what you’re doing here. Orange Vanilla Coke
Like an orange creamsicle melted into Coke. Blueberry Acai Diet Coke
What does acai even taste like alone? It’s always paired with blueberry. Anyway, I’ll take a fruit flavored soda any day. Except any sort of melon. I’ll die of thirst. I wish these cans were bigger and not diet. Yeah, I said it! Make it worse please! Kinde Joy and Crokki
I was interested in what Kinder Joy was after seeing an ad. (Ugh, they got me!) My grocery store had a huge display so I grabbed one. I thought I grabbed a Disney Princess one, but I got way better, Star Wars!
While at Cost Plus, I ran across a brand that looked very similar with a similar treat and toy inside, so might as well try it! According to their website Crokki also has Star Wars and Disney toys.

I have to say, while they both taste great, Kinder Joy has a lot more dessert to enjoy. The Crokki one was like wuuttttt? There is so much real estate for the that tiny toy! Hardly any hazelnut spread and the most ridiculous “spoon”.

The things I didn’t buy for various reasons: Fruity Lucky Charms
I don’t usually buy sugary cereals! Honestly! I eat “healthier” ones and never for breakfast. Usually late at night. Even then I rarely finish a box because I don’t actually like cereal and milk. Pop Tarts Cereal
I just don’t think it’s going to be as good as actual Pop Tarts and you wouldn’t put that in milk. I know it’s not the same texture as Frosted Mini Wheats, but I am not liking the resemblance. Peeps Pancakes & Syrup
I didn’t buy this because I think I would hate this. I don’t hate actual pancakes & syrup though. There’s a generic version of the Magic Unicorn Lucky Charms. I can’t say I’m mad about the wizard character (hello, I play a spellcaster in every game!) But I have to wonder what those shapes are… Gnome or Oompa Loompa, frozen hand, anchor, oddly misshapen clover, thing with purple swirls, it just screams Kul Tiras to me. If it’s tastes the same, $1.47 is a great value! (Hence their name!)

There you have the things I was able to find! I am still on the hunt for Strawberry Guava Coke, and Game of Thrones Oreos. It’s not like they taste any different, I just like the novelty.

Am I going to die from eating all of this? Oh, most definitely.

Disclaimer: This post is not sponsored, I paid for everything with money and my health.