Colour Pop has been around for a few years but I finally got myself a bunch of them this past holiday season. Last year, I bought myself two, when I got them for friends for Christmas. I really loved using them so much that I needed to try other colors.

I ended up making three orders in total. I got a code after the first order to get $ off my second order. And my third order, there was a sale on the holiday collection. The Super Shock shadows are a bargain at $5 each, so I didn’t feel too guilty. And I bought two sets of six, which had a bit of a discount. The Super Shock shadows are not a typical pressed powder, they are a cream powder hybrid. They’re not exactly creams and they’re definitely too moist and squishy to be powders. It’s actually a pretty fun texture.

They are best applied with your finger. Not even a dampened brush, but your finger. It’s hard when you have nails. You may even need to touch up the corners with a brush, it won’t be as vibrant, but it will get the job done without poking yourself in the eye with your talons.

Many reviewers didn’t prefer the matte shades. I got 2 in a set and I can see why. They also need to be applied with your finger for best results and they do need to be blended. How do you do that? With a brush. And they set fast so you need to be quick. I’d rather just use a regular matte powder eyeshadow in that case. Fortunately, for Colour Pop fans, they just came out with regular powder eye shadows! (Or you can use the ones you already have obviously!) They pack them pretty well with foams inserts all around, but stuff still does happen. Two were broken. Prickly Pear has a small chip, but it’s not a big deal, I don’t need a replacement. I didn’t lost any value for my money. Because you can see the chip, I can just mash it in there. I ended up getting a duplicate because I got it in a box set anyway.

Ignition was in a really weird state. The shipping had nothing to do with it. It looks like it had been broken for awhile! It didn’t just look broken but also shrunken and dried. I was very surprised for a product that was just released. Apparently I wasn’t the only customer to have an issue of being sent a broken, dried Ignition. Another Instagram user and Temptalia also had that issue. So I took a photo and sent them an email.

They usual policy is to send broken ones back to them. But they didn’t ask me to send it back which was a relief. The postage to mail it back would have been the cost equal to me paying for a new shadow. Not worth it for me personally. Besides what would they do with it? Probably throw it out because it was unsalvageable. I could save them the trouble and me the $5.

I ended up being very happy with my Ignition. The first swatch I did got messed up (as pictured). On my eyes the sparkly lavender looks great!

I would not recommend depotting them and put them into a Z Palette. They will dry out! Always close the lid tightly and store them upside down. I would recommend not buying a huge load all at once because they will eventually dry out and you might not get through all of them. When it comes to picking the colors you want it can get overwhelming! I hope the swatches I posted helped. Be sure to search for more swatches closer to your skin tone too! I’m an NC15 for reference.

What’s my final verdict on Super Shock eyeshadows? I love the metallic ones! You can use a base to make them stronger. I find Cheap Date is very strong with one swipe, where purples will need to be layered for a bolder color. (I hear that purples are more difficult to formulate.)

I would recommend the metallics they’re special and really other brands don’t really compare to Colourpop when it comes to the metallic formula. They can be really great, but they’re not the same as ColourPop formula. And I like the squishy texture and the glitter finishes they tend to have.

Swatches there aren’t any direct sunlight swatches because it’s been raining. So they are all indoors. I tried to capture the sparkle in the second set of photos. These do not have a primer underneath. Some swatches like the lighter colors may have one swipe, and the darker colors up to three. 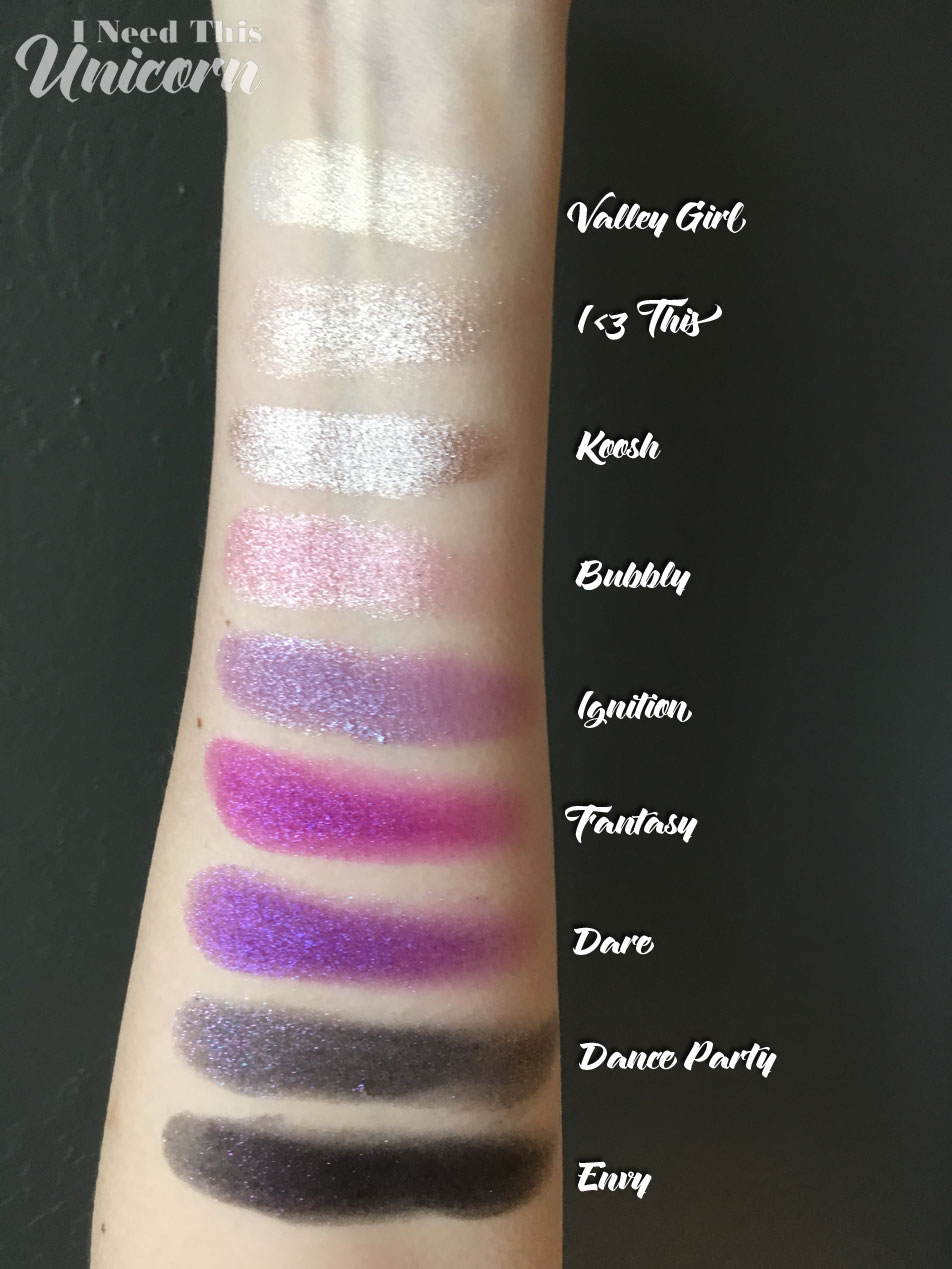 Sometimes, sets come as a discount. This set of six was $25. Super Shock shadows are $5 each, so you can get one for free when purchasing in these sets. Some sets aren’t at a discount, and you pay $20 for 4. Even though I was getting a few duplicates, I found it to be worth the price. I’ll definitely be using them enough to get my money’s worth. I’m obsessed with duo chrome highlighters so I also picked a few highlighters. The texture is so squishy I have to restrain myself from playing with it and ruining it! But it’s fun to press into cause it’s so weird.

I think the pigment isn’t as strong as my other highlighters, but they do create that sheen. (Or glitter in the case of Over The Moon.)  Like the SuperShock shadows, you will have to dab this on with your fingers for best results. (Also to not disturb your foundation underneath.)

In addition to the SuperShock shadows, I got a couple of glosses and a liquid lipstick set.

I haven’t worn them enough to allow a review. But here are swatches: The Hello Kitty collection will discontinue on February 1, 2017. So if you wanted them, you better get on it!

I apologize for the variations in lighting which is affecting the colors. It’s winter and the sun sets earlier and it has been raining a lot so there is no sun light. I need to buy a light and tripod!

Disclaimer: This entire haul was purchased by me with my own money. There are no affiliate links.