I Need This Unicorn is about that lust for something you cannot have or is just otherwise hard to obtain. For years, the unicorn was this amazing looking car I kept seeing. I thought my dream car was out of reach. Never in a million years did I think I would ever be behind the wheel of a Challenger. Thankfully, they come in various models and a used base model really isn’t too expensive. I’d love to tell the story about how I obtained my car. However, that story is best told in person. I will be saving that heartfelt story for people when I see them.

Follow me on TikTok! Right now, I don’t have a specific niche. It may depend on my audience which now, consists of mostly bots. But it’s probably not going to be heavily focused on my car. Even though I said was never really into cars, deep down I think I’ve always liked muscle cars. I said to a former boyfriend, why don’t they have the old muscle look with newer interiors? I grew up with two Camaros in my household (my uncle had one from the 70s and grandmother one from the 80s) and then I owned a Mustang for ten years. What else was next but the only true American muscle left? I kept seeing it on the road, lusting over it. The only car currently in production that still looks like a muscle car… the Dodge Challenger.

If you didn’t grow up poor, with a single disabled parent, who couldn’t drive… you might not know what a privilege it is to have an able bodied parent who owned a car. Imagine being able to go places. That was *not* my life. I was often unable to leave the house or ended up stranded, unable to find a way home. People were exasperated and annoyed when they had to pick me up or drive me anywhere. To have the independence wasn’t something I had. Hell, I was a child for most of it so I couldn’t drive anyway! Even though this is my third car, it’s a big deal for me. It’s the first car that *I* picked and it feels more mine than the other two. To own a car really is a privilege, and to end up having the one I want… I cried on the curb.

Last year my dad and step-mother came over and I showed my step-mother my car, noting that I’d like to get black wheels to change the look of the car. She went back inside and beelined to my dad and said, “you know what would really look great? If Jessica’s car had black wheels!”
A light popped on my dad’s head: New Project! My father is super into cars, and even shows at car shows. He volunteered to buy me new tires and rims, so I let him take over since he’s the expert!

My dad and I chose ones from Asanti, but due to supply issues, it would have taken forever to get delivered. So he chose similar ones from Niche, which is made in the USA. As far as the tires themselves, I had no hopes and dreams. I just wanted to prevent hydroplaning when it rains. I had issues with my Mustang in puddles at stop lights, and just wanted to prevent that danger from happening again. So he picked tires appropriate for all conditions. I’m not here to drag race a V6, so these look like they’ll work well for my needs!
A tip I learned from the owner of Clayton Auto Service…. keep the old tires and wheels. If you were to ever sell your car, keep anything original if you can. Not that I ever intend on selling my car, but I kept it anyway because it seemed like the smart decision.

These Niche wheels will work on a Dodge Challenger, however they need spacers for the front.
He purchased both rims and tires through Paul’s Tire in San Francisco, whom also did the installation.
Also, my dad babysat my car for a few days and took it to get detailed and surprised me with a Ceramic Clear Coat, which I had said I had wanted to do! OC Motivator did a video on it, and it seemed like the thing to do for a black car!

The detailer is located where a bunch of auto shops were, so there were a TON of really cool old cars in the lot. I made sure to take a photo with this classic next to mine! I also saw this really cool old Camaro, which I assume must be from the 60s. If I were to get second car, I’d get a Camaro, preferably one exactly like my Uncle’s black Camaro. No wait, I’d get a Hellcat Redeye or a Demon. If we’re going electric in California, I’m going to get the biggest asshole car I can! haha! But the Camaro is being discontinued, and I’d like to own one. (I’m not going to, I just said I’d like one!😂) 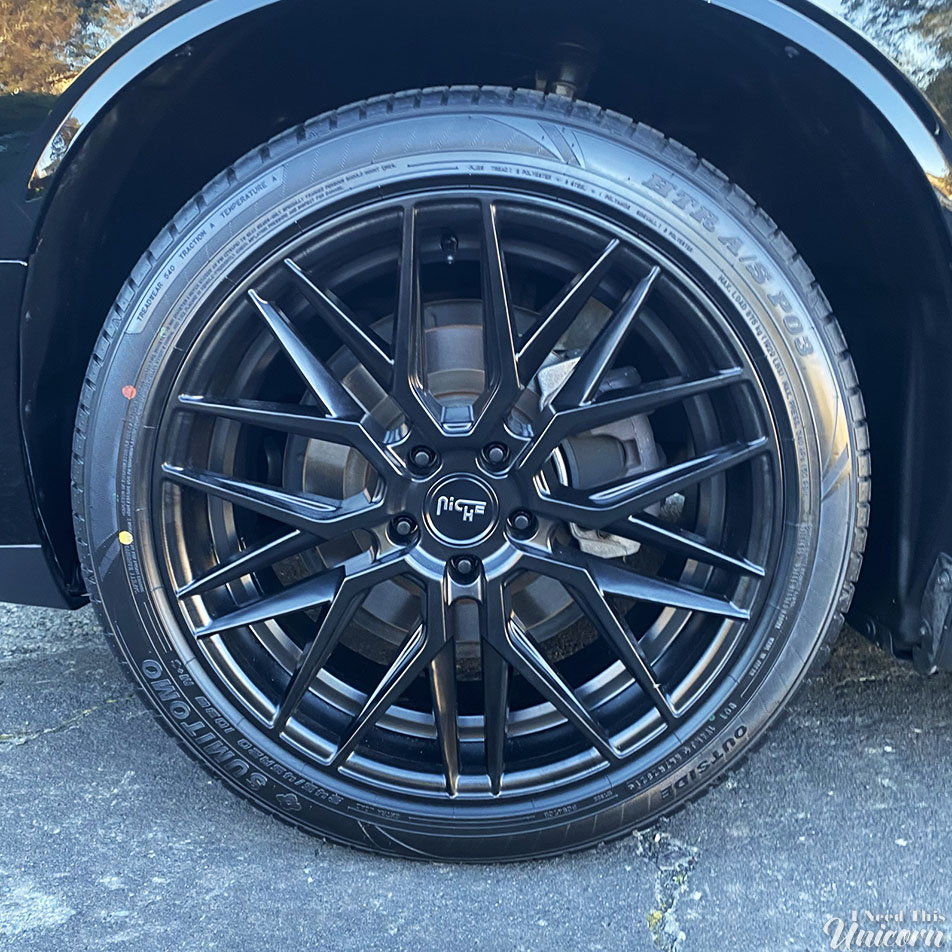 I used to have a Drive Tribe account but unfortunately they shut down. Now I have a Car Meets account and you can follow me on there!

Did you come here because you searched for Dodge Challengers? Maybe you’ll like the stickers and shirts from my shop! If they become popular I’ll make more illustrations for products! My vanity plate is World of Warcraft related. It says my class and spec, Fire Mage.

Here’s the thing about blurring license plates: It’s already out in public. Therefore, there is no reason to cover my license plate. It’s out in public, all the time. No body is interested in stalking anyone. If you are, holy crap, I am not worth the trouble, Sir. Unless you are a cop or work for the DMV, you cannot look up where someone lives. Or steal their identity by simply knowing their plate number. If that were true, we’d find hit and run violators more easily! Also, I am not incriminating myself because I am not breaking any laws. Even being parked in front of this driveway was legal and allowed by the owner of the business.

Are new wheels not aggressive enough mods for you? Baby steps! I am not planning on doing anything terribly serious to my Challenger. I don’t think straight piping a V6 is worth it. (Do whatever you like with your own car.) I don’t really need any performance mods because I’m not racing it. I’d buy a Demon or a Redeye!

If you have a Challenger or Charger, do whatever you can to protect yourself and your car. People love stealing these Dodges, so if you can prevent theft by purchasing a simple RFID blocker, do it. I have here, the Silent Pocket. On Etsy, I found Injected Designs. They have a keychains in different car models! I bought the set that comes with a leather loop with the Dodge logo. It was worth it to spring for the leather loop so I could attach it to the Silent Pocket and hang it on a hook. Since my car’s accent color is red, I wanted red Brembos, If you want those, just spring for the actual painted Brembos, not covers. I was advised by Clayton Auto not only will I need to sign a waiver, but screws could get loose, loosening the cover, and end up damaging the rims and might also cause an accident if they got stuck. I had to send them back because it was a safety issue. It’s too bad because I like the way they look. For the next mod, I could upgrade to Brembos. Is it absolutely necessary? Probably not. But car people love constantly doing something new to their car. If I had excess money, I’d do it.

I’d love to tint the windows, but California is strict about it and even if it is legal you can still get pulled over because they’re bored. It’s not worth my anxiety. I can do the back at least. Unfortunately it will be hard for the person behind me to see that I am flipping them off. Priorities.

I am also wondering if the spoiler could be bigger….
Sorry, I mean a waaang! Above is the last time I had the Mustang, and a two days later I parked in the same(ish) spot with the Challenger. I’d like to take this moment to say RIP to my first two cars.  I know the Sunfire had been scrapped. I am too devastated to find out what happened to the Mustang. I will never let this happen to the Challenger, I am keeping this car forever.

Disclaimer: This post isn’t sponsored by any of the brands or businesses mentioned. The tires and rims were a gift from my father, he paid for the wheels and the services. Not only is my dad to thank, but April for telling him! Alex definitely deserves the biggest thank you.